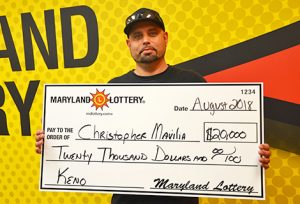 Casual Keno player Christopher Mavilia hit for $20,000 on Aug. 26, thanks in part to a Keno Sprinkler Doubler that came his way.

Christopher Mavilia and his wife set Lottery luck in motion on Aug. 26 when they reconsidered plans to pick something up at the grocery to eat at home. “The kids were out of town, so we had a little date,” said the Shady Side resident.

The result was a $20,000 Keno win before the main course! The couple dined that day at Dockside Restaurant & Sports Bar located at Tracy’s Landing. They ordered shrimp before choosing the main course and Christopher indulged in a few rounds of Keno.

The casual Keno player always plays three draws with the Bonus multiplier. This time, he placed a 6-spot bet with the Bonus multiplier and the fun began. His ticket printed with a congratulations message, saying the Lottery would double any prize won under a Keno Sprinkler promotion running through Sept. 9. Christopher watched his games with great interest.

“I noticed that a lot of the numbers I’ve played in the past were popping up,” he said. The 39-year-old plays his birth date, wedding date and high school baseball jersey number. As his numbers continued to pop up, the Maryland native realized right away that he’d won! He just wasn’t sure about the size of his prize.

“I wasn’t doing the math real good, so I leaned over to the waitress and said, ‘That’s 10, right?’ She gasped and said, ‘No, that’s 20!’ ” Christopher told Lottery officials. Their excitement zapped the couple’s appetite. Hoping their run of luck wasn’t over, the Anne Arundel County residents left the restaurant and drove to MGM National Harbor to play with $20 they had on hand.

To celebrate, Christopher and his wife plan to return to the Dockside Restaurant & Sports Bar and enjoy a full meal. “That’s a great restaurant. Everything’s good!”

The restaurant wins not only Christopher’s seal of approval, but also a $200 bonus from the Lottery. The bonus, equal to 1 percent of the prize, is awarded for selling winning Keno tickets of $10,000 or more.