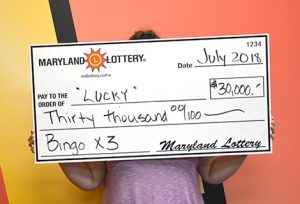 A Frederick woman celebrated a $30,000 scratch-off prize in the Maryland Lottery’s Winner’s Circle.

She wins so frequently that she has been nicknamed “Lucky” by a clerk at the Exxon station at 5870 Ballinger Creek Pike in Frederick where she buys her Maryland Lottery tickets.

On July 11, however, the 19-year-old Frederick woman more than lived up to her nickname, winning a $30,000 top prize on a Bingo X3 scratch-off ticket. And just to show how lucky she is, she won smaller prizes in the $5 to $30 range on the same evening. Her luck did not end there, as she recently got an advancement at the fast food restaurant where she works.

“I just got promoted, so it’s been a good month,” she said. Though “Lucky” is a regular at the Exxon station (which will receive $300 for selling the top-prize ticket), it has not been for purposes of fueling up. With her winnings, however, that will be changing. She plans to make a down payment on a car. Why a down payment when she could afford to pay cash?

“I want to finance it to boost my credit,” she said, noting that the lion’s share of her prize was slated for savings.

Going forward, “Lucky” anticipates she will continue playing (she enjoys Powerball and Mega Millions, though the bingo-style scratch-off tickets are her favorite), as games of chance are family traditions.

“My grandfather taught me how to play blackjack when I was 7,” she recalled, noting that at the time, the stakes were cookies, not dough.

Bingo X3 launched in September 2017, and five of its $30,000 top prizes remain unclaimed, `along with thousands of additional winning tickets ranging in value from $3 to $3,000.