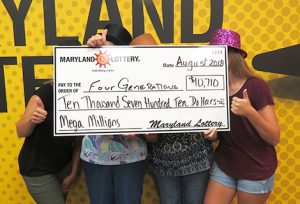 Four generations were on hand when a great-grandmother from West Virginia claimed a $10,710 Mega Millions prize.

Crossing the Potomac River from West Virginia into Allegany County to play family birth dates on a Mega Millions ticket was well worth the time and effort. Four generations of a family visited Maryland Lottery headquarters this week to celebrate the great-grandparents’ $10,710 hit in the June 12 drawing.

Four out of five birth dates picked by the great-grandfather hit for amounts ranging from $10 to $10,000! The Mineral County couple bought the lucky ticket at K&S Liquors at 25207 McMullen Highway in Rawlings.

The great-grandfather is the one who enjoys playing the most, his wife said, and is responsible for picking their numbers. He doesn’t always travel to buy tickets, though, and likewise left it up to his 79-year-old wife, a daughter, granddaughter and great-granddaughter to travel to Baltimore to claim the winnings.

“He plays every week,” the lucky great-grandmother said. In addition to playing Mega Millions, her husband also enjoys Powerball. His birth dates formula has yielded prizes in the past for amounts ranging from $2 to $10.

“He says he wants to win big for me in case anything happens to him,” the great-grandmom said. The smiling Mountain State resident said she plans to spend their prize “wisely.” She will pay off a new refrigerator and buy a new set of tires for her car. “She’ll probably go shopping, too!” the granddaughter added.

No one has hit the Mega Millions jackpot since the July 24 drawing. The prize rolled to $88 million for the Friday, Aug. 17 drawing, and offers a cash option of $52.6 million (before taxes).