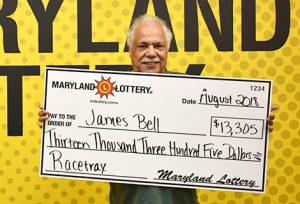 A change in betting strategy and brush with Lottery luck gave loyal Racetrax player James Bell of Cheverly a $13,305 prize this week. The happy retiree won by placing a Superfecta Boxbet while playing his favorite Maryland Lottery game.

The U.S. Marine veteran found his good fortune at Champagne Liquor on Landover Road in Hyattsville. He stopped there to meet a buddy and play rounds of Racetrax. In the past, the Racetrax fan has placed Superfecta bets only to see his four horses finish in the wrong order. He decided to change his strategy and placed a Superfecta box bet. That allowed his four horses to finish 1st, 2nd, 3rd and 4th in any order.

“I told myself that I wanted to win a lot of money that day,” he said. “I decided to take $20 and purchase 10 games of Racetrax.”

The excited Prince George’s County resident plans to use some of his winnings for home repairs. “I may also treat myself to a new flat-screen television,” he said. “Now that I’m getting things done around the house, I don’t have to hear my wife yelling about all the repairs we need.”

Also in the winner’s zone is his lucky Lottery retailer. Champagne Liquor located at 5611 Landover Road in Prince George’s County earns a $133.05 bonus from the Lottery for selling a winning Racetrax ticket of $10,000 or more. The bonus is equal to 1 percent of the prize.