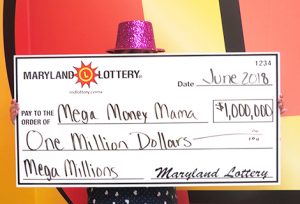 Every Friday evening, “Mega Money Mama” purchases Maryland Lottery tickets for her favorite games, including Mega Millions. She almost didn’t stop for tickets on June 15 but made the wise decision to swing by Grinders Liquors in Marbury and stick with her game-playing routine. That was a $1 million decision!

The next morning, the Indian Head resident checked her tickets online. She matched all five white balls, just missing the gold Mega Ball for the jackpot.

“I thought I had accidentally written down the numbers from my ticket instead of the winning numbers,” the lucky winner said, still in shock.

Through all the excitement, the grandmother of three stayed at work and finished her shift before bringing the ticket home for safekeeping.

“I signed the back of the ticket, and tried to find a good hiding spot at home,” the 61-year-old told Lottery officials. “We did not sleep well that night. That’s when we decided to take it to a safe deposit box until we could bring it here to claim.”

“Mega Money Mama” is unsure of what she’ll do with her winnings. The next step is a visit to a financial adviser to see if she and her husband can retire.

The Lottery retailer who sold the $1 million ticket wins, too! Grinders Liquors at 4450 Chixamuxen Road in Charles County earns a $2,500 bonus for selling a $1 million Mega Millions ticket. Want to try your luck, too? The Mega Millions jackpot continues to grow. Tonight’s drawing has an estimated annuity value of $212 million.