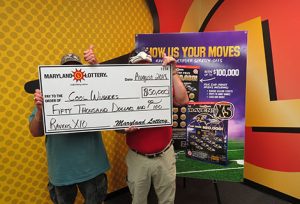 These “Cool Winners” from New Market have a new set of wheels and an HVAC system in mind for their $50,000 prize.

A Baltimore Ravens fan who escaped the scorching summer heat by patronizing an Ocean City bar found himself drinking a cold beer in the company of four Ravens X10 scratch-offs.

They didn’t do much talking or squawking, but the third of the four tickets did give the New Market man a $50,000 prize! “I looked at that scratch-off quite a bit,” said the 59-year-old. That discovery, which he kept quiet, sent him reaching for his phone to share the great news with his brother-in-law.

“He called me immediately and let me know,” said his brother-in-law, who is also from New Market and split the big prize with his relative. “We invest anything we win together. He shocked the heck out of me!”

The two men each have cool plans for their share of the prize, which is why they picked “Cool Winners” for their Lottery publicity photo. The winner plans to buy a cool new set of wheels — a pickup — and his brother-in-law plans to buy a new HVAC system for his home.

Want to try your luck at the Ravens fan’s Ocean City pub? He bought his winning ticket at Cork Bar located at 3 Wicomico Street in Ocean City.

There are still plenty of big prizes in the Ravens X10 game, including three $100,000 top prizes and four more $50,000 winners. The Frederick County resident also belongs to My Lottery Rewards and can enter his non-winning games into the Ravens second-chance contest.

This is the 10th consecutive season that the Lottery and the Baltimore Ravens have teamed up to offer licensed scratch-offs. Players with non-winning Ravens X5 and Ravens X10 games can enter them through My Lottery Rewards for a second chance to win cash prizes, Ravens season tickets for 20 years or a trip to see the Ravens play this fall in Atlanta or Kansas City. The next drawing is Sept. 18.