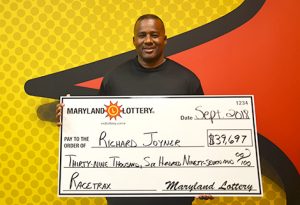 Ever since he was a kid, Racetrax player Richard Joyner of Havre de Grace has dreamed of numbers but the digits 39,697 came as a surprise on Sept. 7! That’s the day he won that amount playing Racetrax.

Retired from the U.S. Army after 22 years of service, Richard now works as a civilian federal employee. The big fan of Racetrax plays nearly every day, but his affinity for the game is unrelated to horse racing. Richard explains his fascination with the game by saying, “I like it because it is like playing Pick 4.”

His interest in betting on four-number combinations began in the 1980s when the Washington, D.C. native was following college basketball rivalries. One evening, he dreamed of a pair of two-digit numbers. A basketball game he was watching a short while later ended with the same score as the numbers from his dream. Richard then bought a DC Lottery Pick 4 ticket, 50 cents boxed, with his “lucky” numbers and won $200!

His love of numbers has remained strong over the years. After retiring from the service, Richard took a job in Maryland to be close to his family and boyhood home and discovered the existence of Racetrax. When he learned he could play the four-number combinations he has favored ever since his D.C. Lottery score, the Harford County resident was off to the Racetrax races.

On Sept. 7, his horses stepped into the Winner’s Circle in a big way. Richard visited Northside Liquors at 210 North Philadelphia Boulevard in Aberdeen to place a Racetrax Superfecta wager. He bet that horses 5, 7, 9 and 8 would finish in that exact order and scored his $39,697 win.

“Finally!” he said. “My wife will be happy when she sees this.” Richard plans to pay off some bills with the proceeds and take his wife on a trip to celebrate his big score.

Also winning is Northside Liquors, which earns a bonus of $396.97 from the Lottery for selling a winning Racetrax ticket of $10,000 or more. The bonus is equal to 1 percent of the prize.