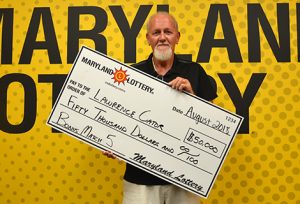 Last week, a Bonus Match 5 ticket’s lucky status caught a retired U.S. Postal Service employee from Lothian by surprise, delivering an unexpected $50,000 windfall and lots of excitement. The occasional player bought his usual $2 quick-pick ticket on Aug. 28, but this time, it matched all five winning numbers and gave him the game’s top prize!

Being on the receiving end of an exciting delivery is new for Lawrence Cator. For over four decades, he carried important news and correspondence from the Washington, D.C. area to points far and wide on his regional mail-hauling route. Lawrence now spends his time working for a commercial garden, growing plants, flowers and shrubs for a variety of clients and playing the occasional game of Bonus Match 5.

His occasional pastime’s payday stunned Lawrence. When the 65-year-old pulled up the drawing results on his smartphone, he didn’t believe his eyes. The celebration began only after Lawrence conferred with his wife about the ticket and rechecked the winning numbers on his phone and the ticket several times!

Although he’s taken home a few small Lottery prizes in the past, this one is Lawrence’s largest win ever. The happy player is still evaluating possibilities for his prize and may use it for home improvements, to boost his savings and help his family.

Lothian Service Center is the lucky Lottery retailer that sold Lawrence his winning ticket. For its role in making this Bonus Match 5 moment happen, the Anne Arundel County retailer located at 5891 Southern Maryland Boulevard will earn a $500 bonus from the Lottery.