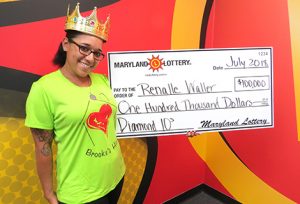 This happy Hagerstown maid cleans up with a $100,000 scratch-off prize.

The Western Maryland native decided to try her luck with a scratch-off at the urging of her mother, who is an avid Lottery player. Mom bought the $10 instant ticket at Central City Liquors in Hagerstown and delivered it to her daughter, who had finished a long day of work for an area cleaning service.

“When mom got home with my scratch-off ticket, I was laying down so I told her to scratch a few lines for me to see if I had won anything,” she said. “A few minutes later, I heard a loud scream. It was mom yelling at the top of her lungs saying that we had won. At first, I thought she was joking. When I realized she wasn’t, I was in such shock. Can you believe that I won this much money off my first ticket?”

Renalle said that she plans to take her family to Disney World and help her mother with home improvements.

“This truly is a blessing for us,” said Renalle’s mom. “This really gives us a safety net to fall back on and lifts a few burdens off our chests.”

Diamond 10s is a new $10 scratch-off that made its debut June 25. The game has eight unclaimed $100,000 top prizes along with 17 $10,000 prizes and thousands of others ranging from $10 to $1,000. The lucky purchase at Central City Liquors also makes the Lottery retailer a winner. For selling the top-prize scratch-off in the game, the store located at 401 West Washington Street in Hagerstown earns a $1,000 bonus from the Lottery.