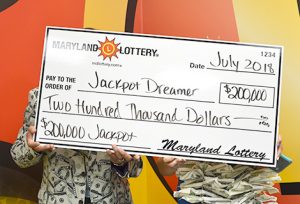 A lot of people spend the day after Independence Day relaxing and recovering from July 4thBBQs and gatherings. One lucky Laytonsville woman spent July 5th a little differently — scratching her way to a $200,000 top prize on a $200,000 Jackpot scratch-off.

“I’ve been trying to stay level-headed since then,” said the winner who nicknamed herself “Jackpot Dreamer”. “I’ve been wating for this day for years, and it has finally happened!”

The 36-year-old was driving home from a long day at work last week when she noticed she was passing by the 7-Eleven at 8455 Colesville Rd. in Silver Spring. Eager to try her luck, she decided to stop in and buy a scratch-off. Once she noticed the colorful $200,000 Jackpotticket, she told Lottery officials that she had a sudden “urge” to try it.

With the thought of winning $200,000 running through her mind, she scratched the ticket while still at the store. As “Jackpot Dreamer” started scratching the last spot on the ticket, she noticed the “Auto Win” symbol. She then revealed the $200,000 prize. The shocked winner played it cool, and asked the clerk to scan the ticket to confirm she won.

The mother of three plans to use some of the winnings toward her mortgage, but also plans to donate to charity.