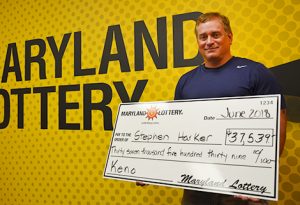 A Forest Hill man who kayaked up to a pierside bar in Ocean City paddled home a bit happier after a few games of Keno. That’s because while having fun with his friends at Sneaky Pete’s, Stephen Harker won a boatload of money. His lucky 7-spot wager on the Keno monitor game was good for a $37,539 prize.

Stephen said he found Lottery luck playing the numbers he randomly picked as a Keno beginner just a few years ago. On June 16, he gave those same numbers — 2, 12, 21, 22, 23, 32 and 43 — another try after paddling his kayak to Sneaky Pete’s at Hooper’s Crab House to meet friends.

The 48-year-old tied up his boat and wagered $3 a game with the Super Bonus feature for 10 games. As his lucky numbers began to appear on the monitor, Stephen cocked an eyebrow and watched them sweep onto the screen, one by one. His days of hungering for a big win were over! The game served up a $27 appetizer followed by a $37,500 entrée and a $12 slice of winning for dessert.

At first, the Harford County resident wasn’t sure how much he won. Stephen later worked out his prize total for each game and applied the Super Bonus multiper to reveal his jaw-dropping total.

The attorney, who owns Bel Air businesses Key Title Inc. and East Coast Realty, told Lottery officials that he will probably use his winnings for bills and savings.

Want to drive rather than paddle up to his lucky Keno retailer? You can reach Sneaky Pete’s at Hooper’s Crab House at 12913 Ocean Gateway in Ocean City. Hooper’s Crab House is a winner, too. For selling a winning Keno ticket of more than $10,000, the Worcester County business earns a $375.39 bonus from the Lottery — equal to 1 percent of the prize.