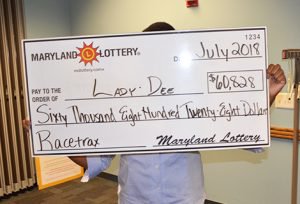 “Lady Dee” of Landover hit it big by following a friend’s suggestion to place a Superfecta Box bet on horses 9, 10, 11 and 12.

A friend introduced “Lady Dee” to Racetrax a few years back and she’s played — and won — ever since.

“I won $112 on a three-times Bonus!” she said, remembering an early Racetrax experience where the game’s Bonus multiplier made her day. While she plays Pick 3 and Pick 4, and buys the occasional Mega Millions ticket, Racetrax remains her favorite Maryland Lottery game. “Lady Dee” enjoys the game because she likes the odds, or at least the frequency with which she wins. About two weeks prior to her big score on July 25, she won $2,800.

As for how she picks her horses, “Lady Dee” says she has no particular system other than sticking with her selected combination for several races. A friend suggested she play the numbers that led to her big win, for example, and she bet the same four horses for 20 races at Primos Liquors in Landover.

As for her prize, “Lady Dee” plans to add some of the windfall to her retirement fund and may possibly take a trip.

Primos Liquors’ proprietor also has reason to celebrate her Racetrax prowess. For selling a winning Racetrax ticket of more than $10,000, the retailer located at 7740 Landover Road earns a bonus from the Lottery equal to 1 percent of the prize ($608.28).