Lolita Little-Staten has had a little extra spring in her step this past month. That’s because the Baltimore resident has known since mid-December that she was one of six finalists with a chance to win Ravens season tickets for 20 years through the Maryland Lottery’s Ravens second-chance promotion. Although she was initially calm, the excitement and anticipation grew the closer Lolita got to finding out if she was the big winner.

The finalists gathered at M&T Bank Stadium today to learn who would win the coveted prize, which includes two club-level tickets and parking to every pre-season and regular-season home game for the next 20 years.

Prior to the big announcement, the group enjoyed a private tour of the stadium, which culminated in the team locker room. Once there, the finalists were greeted by former Raven Zach Orr and mascot Poe. The finalists lined up next to a locker covered by black draping, hiding a jersey which was printed with the winner’s name. Orr said a few words, and then, with a big grin on his face revealed the jersey in the locker, which simply read, “Lolita”. 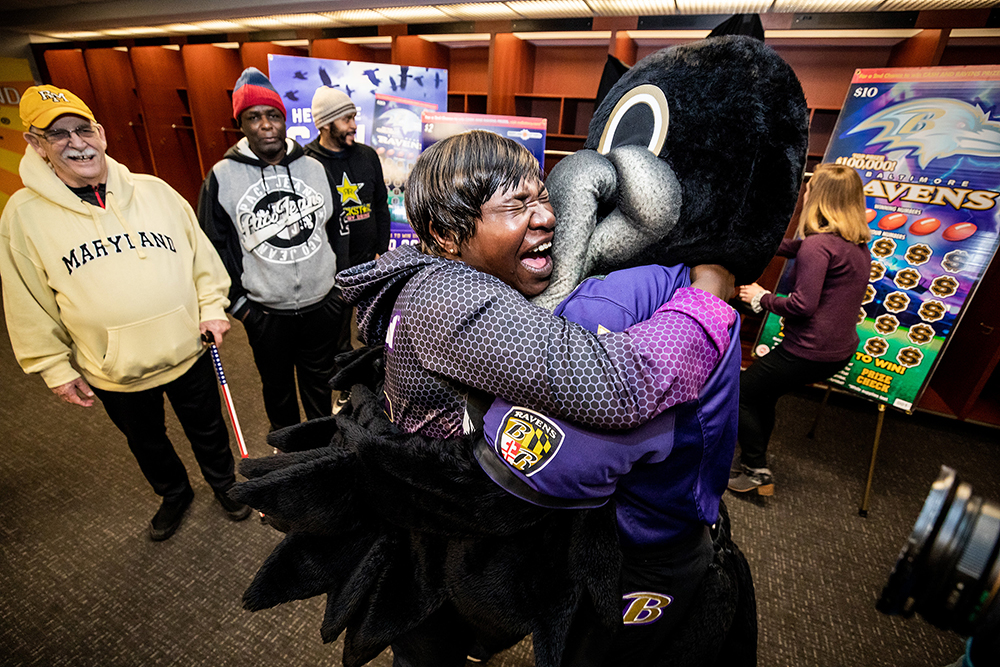 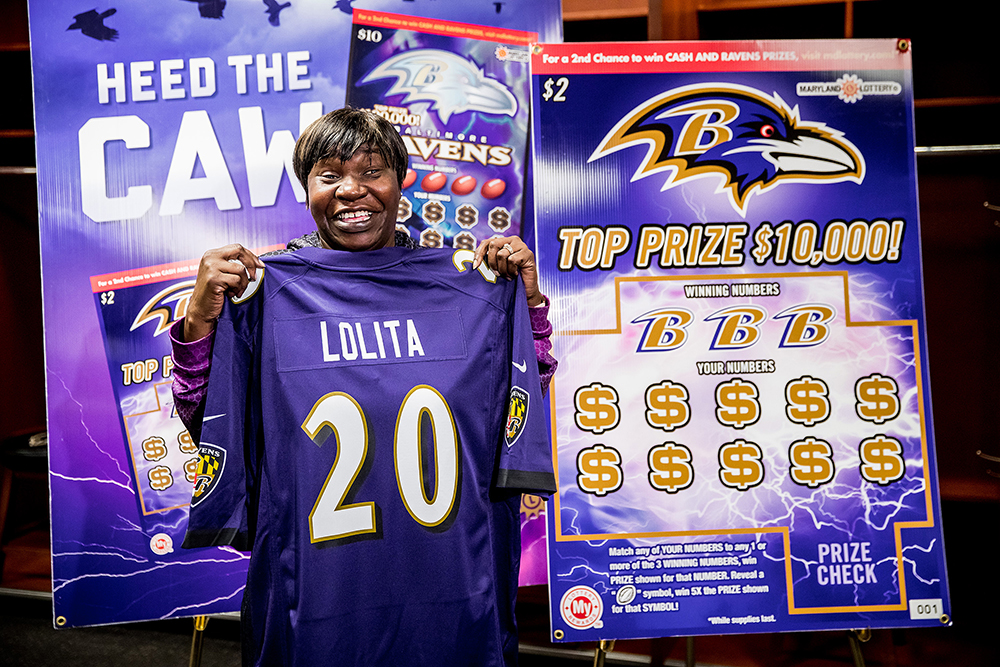 “I was too nervous at first to turn around to see who won,” the 53-year-old Enoch Pratt Free Library employee told the crowd, as tears streamed down her face. “I’ve never won anything in my life. I’m so excited!”

Lolita, who was accompanied by one of her four brothers this morning, has a positive outlook for the team. When asked what she expected to see over the next 20 seasons, she replied, “I expect Lamar to take us to at least four Super Bowls!”

The six finalists, who were randomly selected from more than 1.3 million entries in this category, each won $10,000 just for being selected. The other finalists were: Bryant Finklea from Baltimore; William Owens from Aspen Hill; Ansa Riaz from Snow Hill; Linda WalkerKnight from Glyndon; and Randolph Winns from Baltimore.

For the 11th year in a row, the Maryland Lottery and the Baltimore Ravens have teamed up to offer players scratch-offs and second-chance prizes. Players entered non-winning $2 and $10 Ravens scratch-off tickets for the chance to win cash and a variety of Ravens-themed prizes, including the “Seats for 20 Years” prize, an away trip with the team to Los Angeles and season tickets for one season. More than 4.8 million total entries were received for the entire promotion.

“It was so easy to enter this promotion,” the excited winner said. “You just buy tickets, go to My Lottery Rewards, enter your tickets and wait to see if you won!”

Past winners of the “Seats for 20 Years” prize include Kim Feather from Pasadena; Dawn Brink from Stevensville; Vanessa Williams from Rosedale; Beth Bunch from Baltimore; Vernon Miller, Jr. from Bel Air; Tuesday Johnson from Germantown; Brenda Grier from Glen Burnie; Ariadna Bila from Gaithersburg; David Williams from Clinton; and Umang Patel from Crofton.