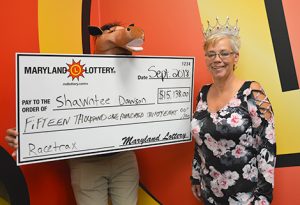 Shawntee Dawson of Delta, Pa., has played Racetrax for as long as she can remember. While she wins “every few months on the horses,” the Maryland native had never claimed a prize as large as the $15,138 windfall that brought her to Maryland Lottery headquarters in Baltimore.

She grew up in Bel Air and favors Racetrax, although she plays scratch-offs and once won $5,000 on an instant ticket her son got her for Christmas. The loyal player said she just loves watching the Racetrax horses on the monitors. When it comes to selecting numbers, Shawntee picks from a variety of significant dates. She just toppled her last big win of $14,000 but betting a combination of birthday numbers!

Her windfall arrived on Aug. 31, when the 53-year-old bought the lucky ticket at Wawa #586 in Bel Air. The avid fan didn’t stay to watch the races that day and later checked her luck at home on her computer. Shawntee was so overwhelmed when she saw her prize topped the $2,000 mark that she let out an ecstatic screech, which brought her concerned daughter running to her side.

“My daughter asked how much I won and I was so excited that I couldn’t concentrate to figure it out,” Shawntee said. “I had to have her tell me. She looked online and told me $5,046 times 3 and that’s what I won.”

The winner had placed a Superfecta bet that horses 1, 11, 3 and 7 would finish in that exact order (a $5,046 prize) and added the Bonus multiplier feature to her ticket. The multiplier for her winning game was 3. She typically plays for 10 races but, on a whim, upped her drawings to 20. This random change paid off as she hit her numbers on the 12th race on the ticket.

“This is truly a big blessing,” she said.

Shawntee plans to use the prize to pay off her credit card bills, boost her savings account and help care for an autistic relative.

Joining her in this victory is Wawa #586 located at 601 Hoagie Road in Bel Air. Because the store sold a winning Racetrax ticket of $10,000 or more, the Harford County retailer will earn a $151.38 bonus from the Lottery. The bonus is equal to 1 percent of the prize.