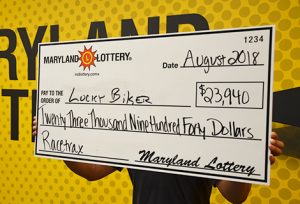 Speed is definitely what attracts a “Lucky Biker” from Virginia to play Racetrax, and he was able to pocket the winnings from two quick picks he made on July 23 in District Heights. The two tickets hit for a total of $23,940, which will help him pay off a fast, new motorcycle.

“I don’t like to wait,” the Fairfax, Va. Man said of his preference for playing Racetrax, and sometimes Keno, as opposed to draw games or even scratch-offs. He had to wait a month, however, to  claim his winnings because he needed to make arrangements to travel from Virginia to Maryland Lottery headquarters in Baltimore. The July 23 Superfecta Wheel win was not “Lucky Biker’s” first big score in Racetrax; he also hit for a single race in the $12,000 to $13,000 range.

Seeing the animated ponies zip around the track in the simulated horserace is part of the attraction for the 30-year-old player. In addition to enjoying the quick pace of the Racetraxgame, “Lucky Biker” is also a fan of motorcycle riding and its speed-related thrills. He recently purchased a new ride, and plans to use some of his prize to pay off the 1,000cc machine.

Though Racetrax is his go-to game, “Lucky Biker” sometimes plays the casino games at MGM National Harbor, where he redeems winning Lottery tickets.

“You can cash out there. It’s hard to walk out with all that cash without playing a little,” he says.

Also benefiting from the win is Dodge City Market at 7409 Marlboro Pike in District Heights, where “Lucky Biker” played the virtual ponies. The store will earn a bonus of $239.40 (equal to 1 percent of the prize total) for selling a winning ticket over $10,000.