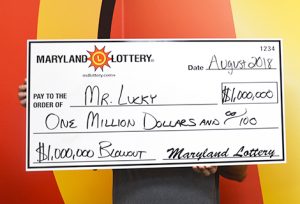 The color purple quickly led a Silver Spring man to $1 million worth of Lottery green this week. The happy handyman is the first player to win a top prize on the $1,000,000 Blowoutgame.

One look was all it took for the instant ticket fan to know he had to try the Maryland Lottery’s $20 purple scratch-off. The game that hit stores June 25 is covered with images of cash raining down. What the Montgomery County man didn’t know is that he was heading for a joyful blowout of his own.

The 38-year-old tinkerer going by the name “Mr. Lucky” discovered the winning ticket at Sunshine Ethio in Takoma Park. He was checking out scratch-off choices in a Lottery vending machine there when he spotted the $1,000,000 Blowout game. The lucky player bought the instant ticket and quickly revealed the game’s Prize Check area to see if he held a winner. Mr. Fix-it became “Mr. Lucky!”

As soon as he could collect himself, “Mr. Lucky” and a friend set out for Lottery headquarters in Baltimore to claim the prize. The excited winner opted for the cash value of the annuitized prize, saying he planned to save the funds and perhaps use a portion on a business venture.

The Lottery retailer also wins big. Sunshine Ethio located at 6907 New Hampshire Avenue in Montgomery County earns a $1,000 bonus from the Lottery for selling the top prize scratch-off in the game.