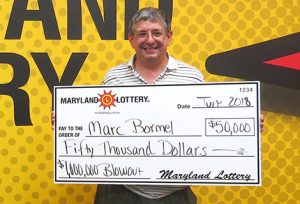 The federal employee, who will tally 20 years of service this month, found his $500 win last Thursday. The Owings Mills resident decided to try his luck again that day with the $20 game that went on sale only days earlier.

The Baltimore County scratch-off player selected the same game when he stopped on Saturday at Long Reach Exxon, located at 6000 Foreland Garth in Columbia. Marc “The Sharc,” which is his work nickname, bought one game to play during his work break and took it out to his truck. The 48-year-old typically begins by scratching off the top numbers and prize amounts on the right-hand side of the ticket. When he did that on his lucky $1,000,000 Blowout ticket, he immediately saw prizes of $1,000 and $10,000 appear. Marc continued scratching the game and revealed prize after prize for a total win of $50,000.

“I just said, ‘Oh, my. Oh my!’ ” recalled Marc. The lucky winner finished out his work shift that day without anyone being the wiser that he had a $50,000 winning scratch-off in his possession. He hid the instant ticket in his house for safekeeping until he could claim his prize on Monday.

Marc plans to pay bills with his windfall, help members of his family financially and keep playing the $1,000,000 Blowout game in hopes of finding its top prize. The game has seven unclaimed $1 million top prizes, 14 more $50,000 prizes and 55 $10,000 prizes awaiting discovery.