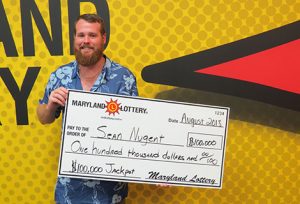 Sean Nugent of Ocean City celebrates his top-prize win on a $100,000 Jackpot game.

An Ocean City resident who paused during a fantasy football draft to play his $100,000 Jackpot scratch-off became the center of attention when he revealed his Lottery pick carried top prize. Even though the NFL season has not yet begun, all in attendance agreed that Sean Nugent’s $100,000 win made him the automatic league champion.

The 28-year-old restaurant manager had gathered with fellow employees and those of other Ocean City restaurants to pick out the players that each hoped would push their fantasy team over the goal line. Earlier that day, the Worcester County resident stopped at his local 7-Eleven to buy a pack of gum and the $5 scratch-off.

The group was midway through the draft when Sean’s time to pick a player rolled around again. All they heard was silence. “I had scratched the ticket a few minutes earlier and was just sitting there in amazement,” Sean said. “They all started yelling for me to pick. All I could get out was, ‘Give me a minute!’ ” Word of what was causing the delay spread quickly. “There were more than a hundred people in there. The place just went nuts.”

The Lottery’s $100,000 Jackpot game hit retailer shelves in May. Only two players had claimed the instant ticket’s top prize when Sean found his lucky scratch-off at 7-Eleven #19083 in Ocean City. Three top prizes remain along with hundreds of thousands of others ranging from $5 to $5,000.

“I love this town,” the winner told Lottery officials when asked about his plans for the $100,000 prize. “I’ve been hoping to buy a house in Ocean City for such a long time. It looks like now I’ll finally be able make it happen.”