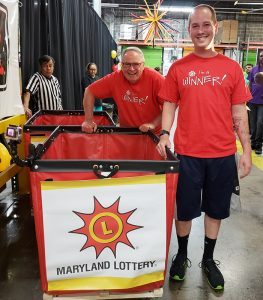 Bob Ignatowski, Sr. has been playing the Lottery since it began in 1973. Through the years, he has won various prizes, but his recent string of Lottery wins is something of an anomaly.

In a span of 22 days, the 63-year-old retiree participated in the Lottery’s Warehouse Dash trip to Chicago, won a trip-for-two on the Power Cruise, was selected as a Home Run Riches“Contestant of the Game” and won $500 from the Summer Cash Kickoff promotion.

In November, Bob was selected as one of 12 winners of the Warehouse Dash prize from the Lottery’s Holiday Cash & Dash promotion. The trip to Chicago, which took place in June, gave winners 90 seconds to race around a merchandise-filled warehouse. Bob came home with a number of prizes, including a 65” television, an iPad, tools and more. His success during the Dash may in part be due to his son Steven’s creativity — he took notes on his arm as a reminder of the location of certain items. The Warehouse Dash was the first of Bob’s four prizes.

A little over a week before his trip to Chicago, Bob was selected as a Home Run Riches “Contestant of the Game” for the Orioles’ June 30 game. “Contestants” win $500 for being selected, and $500 for every O’s home run hit during that game. Unfortunately, the O’s did not hit any runs that night, but Bob was still happy with his $500 prize. This was the second of Bob’s four prizes.

Two days after learning he was a “Contestant of the Game”, Bob’s phone rang again.

“I couldn’t believe it,” he said with a smile on his face. “The Lottery called to tell me I won a trip on the Power Cruise!”

Bob, along with 24 other Maryland Lottery winners and hundreds of winners from lotteries across the country, will embark on a five-night cruise in January 2019, with the opportunity to win more cash prizes on the ship. His third big Lottery prize, the Power Cruise will be the first cruise for Bob and Linda, his wife of 44 years.

“One more thing to cross off our bucket list, thanks to the Lottery,” the northern Baltimore County resident said.

The icing on the cake came on June 19 when Bob was selected as a $500 Summer Cash Kickoff promotion winner, rounding out his four big Lottery prizes in just over three weeks.

In addition to the excitement of winning all those prizes, one particular prize has changed his life.

“After winning the Warehouse Dash, I decided it was time to lose some weight and get healthy before running around the warehouse,” the father of three and grandfather of four said. “Since finding out I won last November, I have lost 44 pounds. I feel really fortunate to have experienced all this luck over a short period of time.”