x
Lottery Claims Center in Baltimore is open by appointment only. If you have a winning ticket, click here to schedule an appointment. 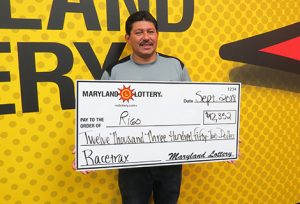 A Silver Spring scratch-off fan switched his game of choice to Racetrax several months ago after learning of a relative’s success with the computer-animated horse racing game. The novice now has a success story of his own to tell!

The day of his lucky win, the father of four was shopping at the Internacional Mercado Latino convenience store in Wheaton. He added a 20-draw Racetrax Trifecta ticket to his purchase and saved $3 on his wager because of a $6 for $5 Racetrax promotion under way through Sept. 9.

“Rigo” returned home with his items and checked the race results there. Much to his surprise, the 10, 12 and 6 horses finished in that exact order in one of his 20 races, delivering his biggest win ever! The lucky player and his wife plan to share some of their prize with family and friends.