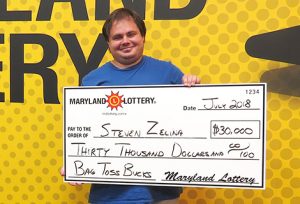 South Carolina’s Steven Zelina found his Lottery luck in Maryland, where he is staying while working a retail construction job.

The Maryland Lottery gave South Carolina native Steven Zelina a welcome to Maryland gift that is hard to beat — a $30,000 top-prize scratch-off win.

The Suitland man, who is a longtime scratch-off fan, and his father are in the state temporarily working on a retail construction job. The lucky bachelor bought a $3 Bag To$$ Bucks game at Royal Farms #204 in Camp Springs.

His biggest scratch-off win in the past was $100, he said, but even finding the game’s $30,000 top prize didn’t lead the low-key player to unrestrained whooping and hollering. “I knew what the prize was,” Steven said, “but I scanned the ticket on my phone to be sure.” The 28-year-old shared news of his good fortune with his father, who at first doubted the win was real.

The lucky player’s plans for the prize are simple: pay bills and put the remainder of the windfall into savings. He also will keep playing Maryland Lottery scratch-offs such as Bag To$$ Bucks, which still has hundreds of thousands of unclaimed prizes including five more $30,000 top prizes.

Also seeing green because of his lucky win is the Lottery retailer. The store located at 6210 Allentown Road in Prince George’s County earns a $300 bonus from the Lottery for selling a top-prize scratch-off in the game.