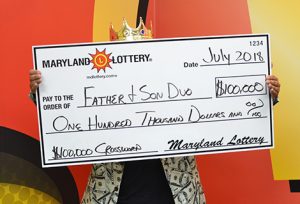 This happy winner found his first Lottery prize on the $100,000 Crossword game.

A Prince George’s County man found his first Maryland Lottery scratch-off win and was it ever a doozy! He’s $100,000 richer after catching the top prize on the $100,000 Crossword game.

“I still can’t believe it, this is all just a dream,” said the happy player. “I’ve never won before and this is such a great way to win the Lottery!”

After buying the game at Long Branch Beer & Wine in Silver Spring, “Father and Son Duo” went home. The 35-year-old winner almost forgot about the instant ticket. When he remembered the game, he played it and revealed his $100,000 top prize.

The happy man returned to the Montgomery County retailer to verify his win. The clerk, just as excited as the player, confirmed his Lottery luck and directed him to Lottery headquarters in Baltimore to claim his prize.

“Father and Son Duo” will save the winnings for future endeavors. The lucky retailer is also a winner. For selling a $100,000 top-prize winning scratch-off, the store at 649 University Boulevard East earns a $1,000 bonus from the Lottery.