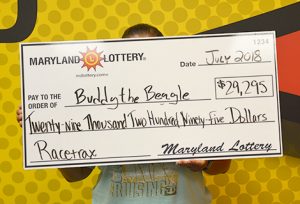 This Upper Marlboro woman credits “Buddy the Beagle” with clearing the way for her Racetrax win. She claimed a $29,295.70 prize on a 10-cent Superfecta Box bet.

A doggone snake outside her door stopped a frightened Upper Marlboro Racetrax fan in her tracks on July 23, leading to a temporary, but financially rewarding, delay of game. The 63-year-old said the snake-induced change in her Racetrax routine followed by “Buddy the Beagle” showing her the coast was clear led to a $29,295.70 payoff!

The winner was leaving her house to play the virtual ponies at Marlboro Country Liquors in Upper Marlboro when she opened the door and spotted the snake.

“The snake scared me back in,” she said.

Her husband, also a fan of Racetrax, surmised that recent heavy rains drove the snake from its lair. About an hour after retreating into her house, the woman let Buddy outside to run reconnaissance. Buddy went out the same door, sniffed around and did not encounter the snake.

The happy player resumed her excursion to her favorite Racetrax venue. She knew just what numbers she would play when she arrived at Marlboro Country Liquors. A few weeks back, the Prince George’s County resident got a ticket for the relatively high-odds Superfecta Box combination of 8, 9, 10 and 12, and had played the set ever since.

“I liked the numbers,” she said. Her strategy is to bet small on high-odds combinations: “10 cents, 20 races, no bonus.” The Bonus is the game’s multiplier feature. Her 10-cent bet played later than usual that day returned the five-digit payout. The big win she credits to Buddy isn’t her first big Racetrax prize, said the lucky lady.

“Every few days we’re hitting something,” she said, noting that she and her husband stopped to play on July 24 before claiming her prize at Lottery headquarters. He won $725.20! Although he generally plays random numbers, the husband based his numbers that day on a Candy Crush game he played. Her big windfall, the winner said, will go straight into her bank account.

Her lucky Lottery retailer also has reason to celebrate. For selling a winning Racetrax ticket of more than $10,000, Marlboro Country Liquors at 14808 Main Street earns a bonus from the Lottery equal to 1 percent of the prize ($292.95).