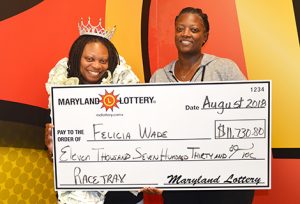 Racetrax player Felicia Wade of Waldorf, left, danced into the Winner’s Circle with her sister Tamara Wade to celebrate her $11,730.80 score.

Loyal Racetrax player Felicia Wade of Waldorf has been on a winning track for a few weeks now. Playing a Superfecta Box bet of 10 cents on Aug. 17 resulted in an $11,730.80 payday.

But that was just one of her recent wins. Two days later, on Aug. 19, she also played the virtual ponies in the simulated horseracing game and hit for another $2,000. On top of that, last month she played a series of Pick 4 combinations of the numbers 1, 0, 1 and 7. When the number came up in the midday drawing on July 29, she ended up with a stack of winning tickets worth about $60,000!

The 49-year-old danced her way into the Buddy Roogow Winner’s Circle at Maryland Lottery headquarters, followed by her sister Tamara Wade, after collecting her winnings. Asked about the reason behind her good fortune playing Racetrax, Felicia said, “I was just feeling lucky. I just study the board and pick four numbers.”

She placed a bet on horses 3, 5, 8 and 11 to finish the race in first, second, third and fourth place in any order — and they did!

A federal government employee, Felicia did not have any specific plans for her winnings other than sharing some of the windfall with her son. She wants to spread the word that real people are Lottery winners, saying she once was skeptical. “I never believed before,” she said, “and then a clerk checked my ticket.” As was the case with much of what she had to say when she was picking up her winnings, this comment ended in laughter.

Also having a reason to smile is her lucky Lottery retailer. Dash In #1130 at 11290 Billingsley Road in Waldorf earned a $117 bonus from the Lottery for selling a winning Racetrax ticket of $10,000 or more. The bonus is equal to 1 percent of the prize.