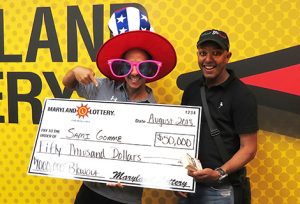 The happy winner, left, celebrates his $50,000 win with his brother-in-law.

A $50,000 Maryland Lottery scratch-off win came just in time for a Washington, D.C., teacher, because he has the sweet sound of wedding bells in his future.

In fact, his upcoming nuptials are the reason the Adelphi man connected with his lucky $1,000,000 Blowout scratch-off. His European wedding guests are starting to arrive, and among them were his sister and brother-in-law. They came early to help him prepare for the big day.

“They are good luck,” said the 37-year-old. The trio were driving from one store to another recently, “buying stuff for the wedding,” when they stopped at 7-Eleven #11569 in Beltsville.

He bought a Mega Millions ticket and then decided to add a $5 scratch-off to his purchase. “We won $10,” he said, adding that it was his first win ever. They kept buying and winning games until they got to the $20 $1,000,000 Blowout. That instant ticket went home with them, which is where they discovered their $50,000 surprise.

“At first, we didn’t know what to do,” said the future groom. “We didn’t think it was real.” They eventually claimed the prize together at Lottery headquarters in Baltimore. The anonymous winner, who called himself “Sami Gomme” in honor of his brother-in-law’s company, plans to spend his prize on the wedding. He also plans to “spread the wealth with the family.”