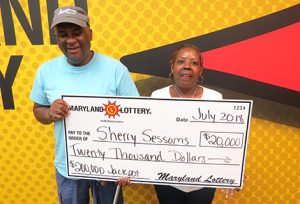 A $10 Maryland Lottery instant ticket sat in her purse for a good week before she scratched it off, Sherry Sessoms told Maryland Lottery officials. The saying “Good things come to those who wait” certainly is true for this Whaleyville resident. She found a $20,000 prize on that $200,000 Jackpot instant ticket!

“I play three or four times a week and have been buying the jackpot tickets since they came out,” Sherry reported. The Lottery launched its four-member Jackpot family of scratch-off games in May. Each game sells for a different price and offers a different top prize.

“I started with the $2,000 Jackpot game, won with it, and worked my way up to this one,” she said. The 43-year-old bought her lucky $200,000 Jackpot scratch-off at Apple Discount Drugs #4, which is located at 314 Franklin Avenue in Berlin. The scratch-off went straight into her purse.

“My husband and I always wait with scratch-off tickets,” she said. “We never play them on the day that we buy them.”

The Lottery luck in Sherry’s game revealed itself last weekend. “I decided to scratch it on Sunday and, a moment later, I thought I was having a heart attack,” said the Eastern Shore resident. The housekeeper called to her husband George, with her voice trembling as much as her legs, to say they won $20,000. “He didn’t believe me,” she said, “and then he looked closer.”

During the next few sleepless nights, the couple decided to allocate the winnings to transportation. “It’s just been so exciting, these last few days,” the winner said. “I still can’t believe it.”