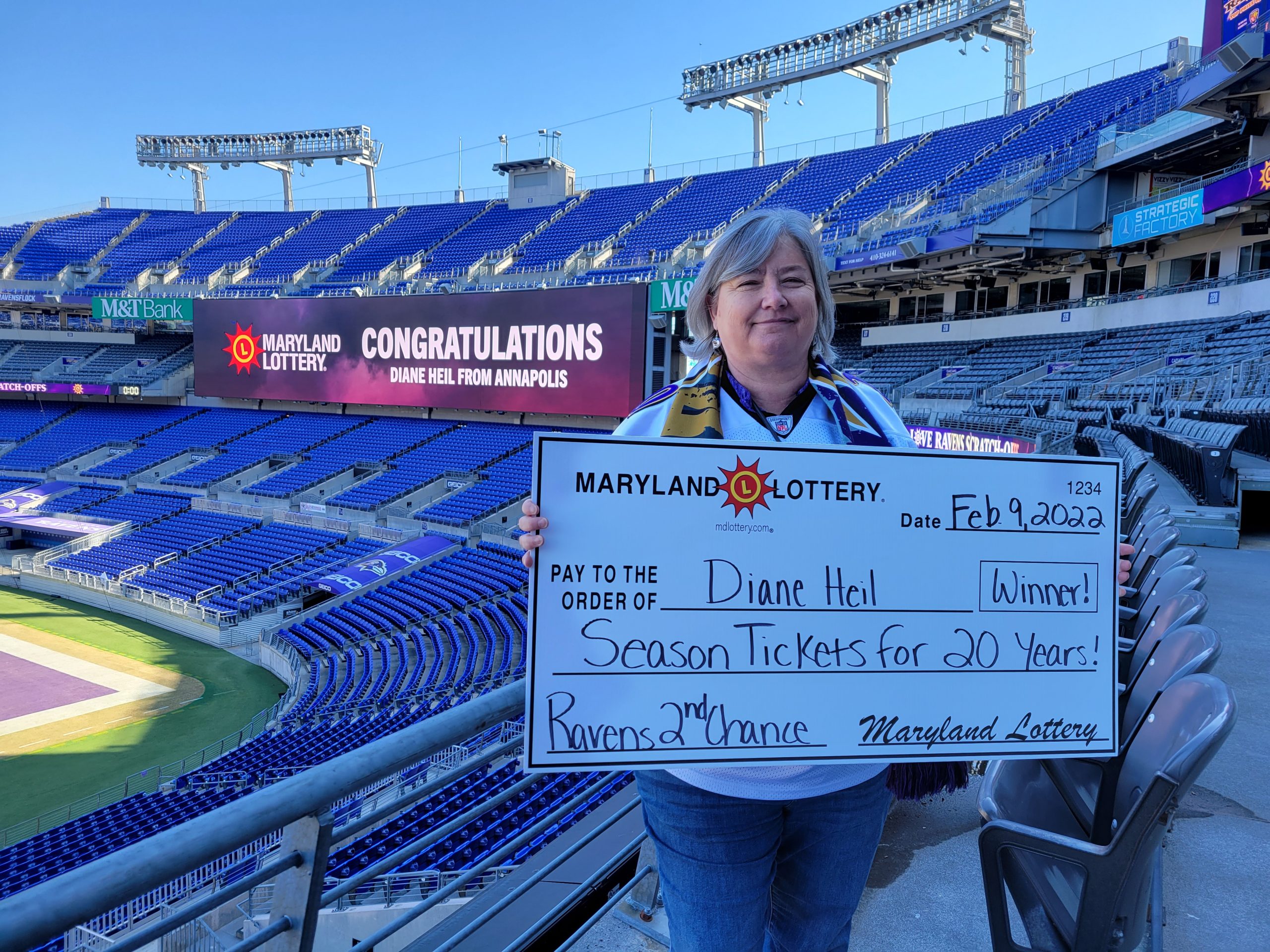 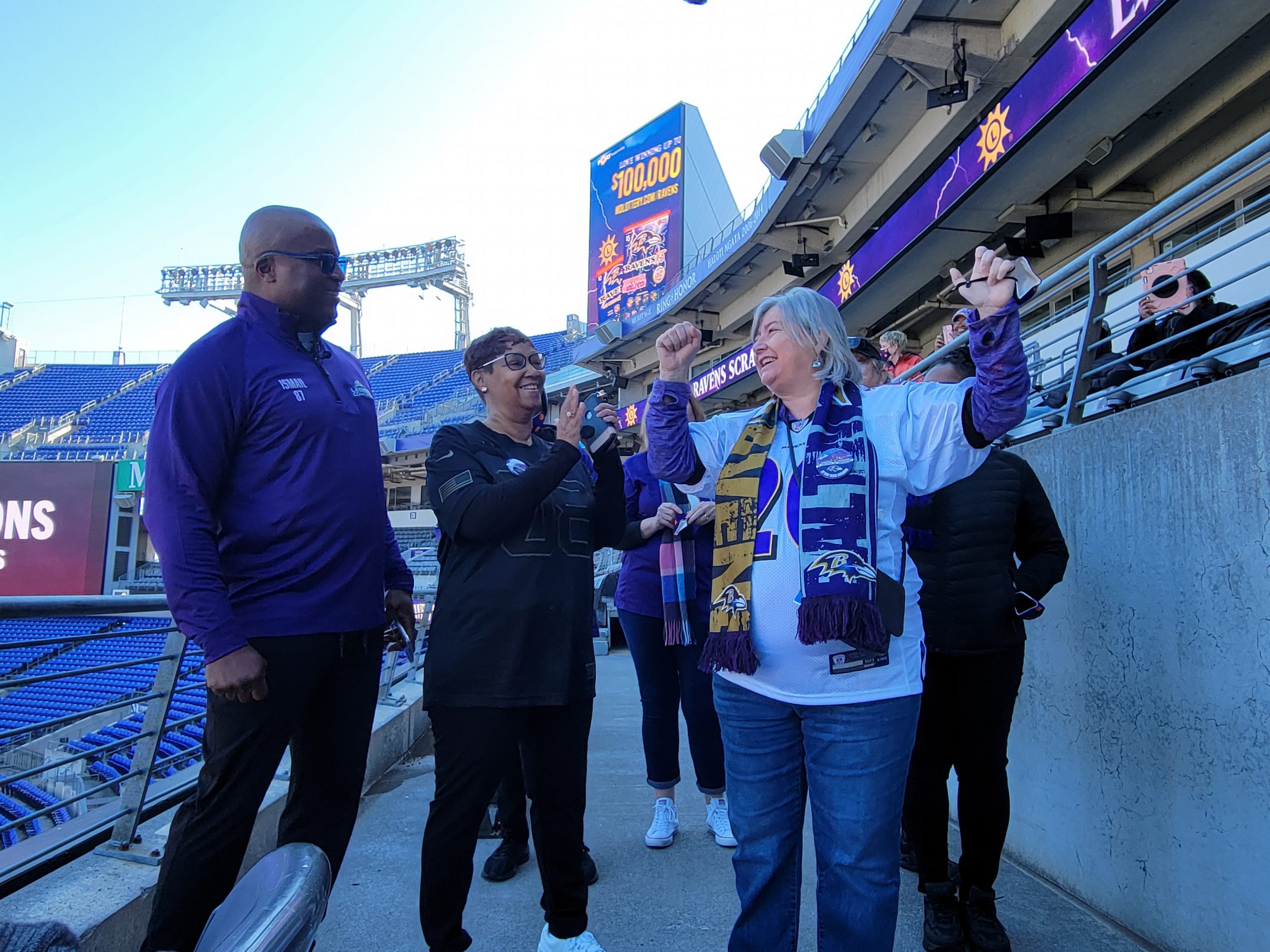 High fives and celebrations all around as Diane Heil was named the final winner of our 2021 Ravens second-chance promotion. Heil won a pair of Ravens season tickets for 20 years!

Diane Heil has been looking forward to February since the Ravens kicked off the 2021 season. That’s because the Annapolis resident has known since September that she was one of six finalists in the Maryland Lottery’s Ravens second-chance promotion, giving her a chance to win Ravens season tickets for 20 years. As the group stood together inside M&T Bank Stadium in front of TV cameras, Diane Heil was named the “Seats for 20 Years” winner.

“Usually my gut feeling is pretty good,” said Heil. “I was fairly sure that I would not be the winner today, but when I saw my name up on the big board it was truly a big surprise.” The 58-year-old Information Technology professional wore her lucky Ed Reed jersey for today’s festivities. “I figured his number 20 and the chance to win 20 years of season tickets – maybe this would give me just a bit more luck,” said Heil.

The finalists and their guests, all donning Ravens attire, met at the stadium earlier today to learn who would win the coveted prize, which includes two club-level tickets and parking to every pre-season and regular-season home game for the next 20 years. The celebration began with a VIP private tour of the stadium, which included visits to the post-game press room and team locker room. Once the tour was complete, the finalists were greeted by former Ravens wide receiver Qadry Ismail, who hosted the big reveal on a club-level stadium deck. After congratulating each of the finalists, Ismail instructed the group to turn around and watch as the winner’s name was displayed across the 100-foot wide stadium Smartvision board.

When asked how she felt about winning the prize, Heil replied, “I feel incredible. This has been one of the best days of my life.” Reflecting on the prize, she added, “It’s just amazing knowing I’ll be able to come to see this great team, right here in this great stadium for the next 20 years.”

The six finalists, who were randomly selected from more than 800,000 entries in this category, each won $10,000 just for being selected. The other finalists were: William Perry from Baltimore; Linda Walkerknight from Randallstown; Karen Roberts from Linthicum Heights; Thomas Hood from Baltimore; and Shantris Grant-Hope from Brooklyn Park.

For the 13th year in a row, the Maryland Lottery and the Baltimore Ravens have teamed up to offer players scratch-offs and second-chance prizes. This year players entered non-winning $2 Ravens X2 and $5 Ravens X5 scratch-off tickets for the chance to win cash and a variety of Ravens-themed prizes. In addition to the “Seats for 20 Years” prize, the promotion awarded season tickets for one season, cash and the opportunity to participate in an on-field Pass for Cash activity on game day. More than 3.2 million total entries were received for the entire promotion.

Past winners of the “Seats for 20 Years” prize have hailed from across Maryland, including Pasadena, Stevensville, Rosedale, Baltimore, Bel Air, Germantown, Glen Burnie, Gaithersburg, Clinton, Crofton and Cambridge.